Shortly after I published my previous post on upgrading React Native apps, the owner and maintainer of the rn-diff-purge repo, Pavlos Vinieratos, kindly reached out to let me know that some changes were in the works to the way upgrades were going to happen going forward. I had an upgrade that I had been planning to do and thought I would give the updated approach a try. This post is a summary of my experience upgrading an RN app from 0.55.4 all the way to the state-of-the-art (at the time of writing): 0.59.2.

The plan for improving upgrade that Pavlos shared with me will happen in two steps. First, a web UI will be released to enable easier access to the diffs. This piece is now complete and is linked to from the original home of the rn-diff-purge repo: pvinis.github.io/purge-web

Next, the current git-upgrade method of performing upgrades with the React Native CLI will be replaced by the purge approach. This is in the works now, and is expected to land in 0.60.*.

I had successfully upgraded my open source react-native-sqlite-demo app, but my side project app that is currently deployed in the Apple App Store had still yet to be done - and was even further behind.

My task was therefor to upgrade a production app from 0.55.4 to the current latest release. At Pavlos’ suggestion, I planned to break from my previous recommendation of working through each upgrade one at a time (even skipping RCs, this would have been 21 individual upgrades 😬), and perform the upgrade in 4 steps (minor release numbers only). This sounded much more manageable. With the new Purge Web page ready, I began. 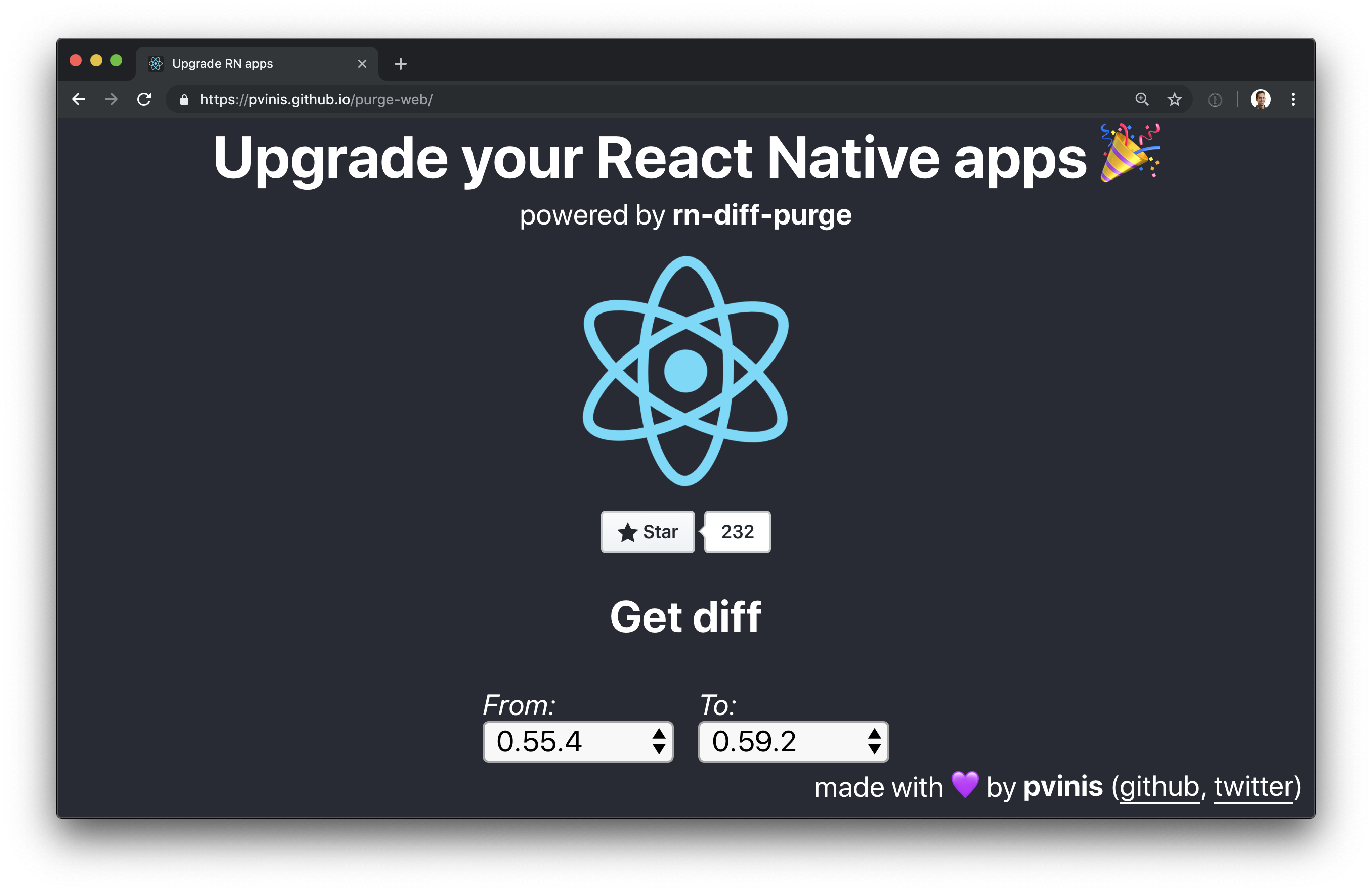 The Purge Web UI is about as simple as it can be: instead of scrolling through a large upgrade matrix of from version and to version cells, you select the version you are beginning with and the version you are upgrading to, and then click Diff here. This link takes you to the familiar GitHub compare UI which details all the changes that you need to apply in order to reach your selected To: version.

Not bad. I went ahead and made the changes, ignoring the Flow related changes since I am a TypeScript user instead.

Uho - upon restarting the Metro bundler I received a nasty looking error in the console:

A quick search on the module in questions’ GitHub repo brought me to the following issue: react-native-popup-menu/issues/111.

Looks like the issue was fixed in 0.13.2! Not wanting to risk a breaking change at this point, I went ahead and grabbed the latest 0.13 release:

With a restart of the Metro bundler I was back in business! All Detox end-to-end tests passed, so it was on to the next one.

Another reasonable set of changes, considering I was jumping ahead 14 releases at once.

After applying the changes, the app built successfully and all my tests passed! At this point I happened to also submit a new build to Apple’s Testflight service, and received an interesting email upon doing so detailing a “Missing Purpose String”:

What?! My app does not use location at all, nevermind always!

It turns out that even though my app does not use the location APIs in JS, I had to remove the native RCTGeolocation.xcodeproj from Xcode as described in this comment in order to satisfy Apple. This is a fair request, and as an app user I’m pleased to see that they are scanning the code for sensitive API use like this.

The only hiccup with this step was that I ran into the odd Error: Cannot find module './bundle/unbundle' issue that I hit during my last upgrade as well. Removing node_modules/ and restarting the bundler worked like a charm 👍.

Unfortunately for me, this time there was a test failure. It appeared to be related to my user’s preferences not being initialized correctly. In short, the app is supposed to take a guess at the user’s home currency, based on their locale. This was not occurring, and the app was left in a state where it did not know which currency to use:

Debugging further led me to discover that the app was figuring out the user’s currency just fine, but when it wrote the currency index to the DB (0 for USD, 1 for CAD, etc.), it was writing 1.0 (instead of 1). When my code later read this value and attempted to use it to figure out the name of the home currency, it was failing. 1.0 is not a valid array index, after all!

With a small code change to fix this bug I was back in business. I am admittedly still stumped as to what change in React Native would have caused the DB to write a float instead of an integer…

I applied the changes and… my Detox end-to-end test cases failed to interact with a key element in the UI! Unfortunately for me, I seem to have been too quick to adopt the 0.59.* release, as the Detox README clearly states that they only support <=0.58 (and <=0.56 on Android).

Despite the offending UI element working fine when run outside of e2e tests, I did not want to proceed without my test suite working. I decided to park the 0.59.2 changes in a branch for later, and return back to my last commit on the 0.58.6 release for now.

The Purge Web page was a joy to use! I almost made it to my goal of version 0.59.2, but it was no fault of the upgrade tools that I stopped short.

I would like to thank Pavlos for all his effort on making upgrading React Native apps easier, and for all the advice he shared with me on the subject - thank you 🍻!

Lastly, keep an eye out for the 0.60.* release. With any luck, upgrading our apps is only going to get easier.