Avoiding issues with Promises in your Cypress E2E tests

Before I begin: The Cypress docs are very clear that while the Cypress API looks a lot like it’s based on Promise’s, it actually isn’t. There’s plenty of detail about the fact that Cypress has it’s own command queuing mechanism which means that — in theory — there should be no need to write your own asynchronous Promise-based code. Nevertheless, since many of the Cypress commands appear Promise-like, your temptation to try and catch an error or even write your own helper function that returns a Promise would be completely understandable. My experience with the latter is what led me to write this post, in which I’ll share a simple trick for avoiding issues while using Promises in your Cypress test code.

We use the Cypress test framework at work for running our end-to-end tests both locally and on our continuous integration server (Jenkins). Aside from a touch of flakiness and some challenges with the Adobe ID login flow, Cypress has been excellent. That is, until I discovered that some test suites were running fine locally but being skipped altogether on Jenkins yet still passing due to the way I had written a helper script to read from sessionStorage, using Promises.

We use an internal feature flags service (similar to LaunchDarkly) to turn app features on and off across dev, stage, and prod environments. Since the service is internal, it uses our app’s access token to determine the enabled feature flags for the current user, on the environment they are signed in to. This part of the system works great.

As part of our end-to-end testing effort I wrote a helper function that determines if the test user has access to a given feature. After all, there is no point running a test on stage if the relevant feature flag is off on stage for testUser1. The function I wrote uses cy.request to hit our feature flag service directly with the access token reused by pulling it out of sessionStorage. This is where things got interesting.

Promises in Cypress, by example

I created a small function to read from sessionStorage and asynchronously fulfill a Promise once the token was successfully read. It looked similar to the below code block (from a repository I created to demonstrate this issue: github.com/blefebvre/cypress-electron-promise-issue):

When this function is called, it immediately returns a Promise which only becomes fulfilled once win.sessionStorage.getItem("token") is called and the token is read. Looks simple enough, right?

Aside! if you’re new to Promises, I’d like to take this moment to recommend We have a problem with promises by Nolan Lawson which completely changed the way that I thought about Promises when I was first wrapping my head around them. The Promises/A+ standard is also worth a read, and gets right to the point.

The above code looks correct, and Chrome thinks that it’s correct too! You could run a test that uses the above function and it would happily work locally when run via the Cypress UI, assuming you are targeting the Chrome browser.

However, if you were to run your tests using the Electron browser which ships with Cypress or headlessly (which uses Electron under the hood), the tests would do perhaps the worst thing they could: pass, but skip any test code which occurs after the call to getAccessTokenPromise().

The Cypress docs truly are great, and the solution that I needed to make this work was in there all along: use the Cypress.Promise utility in your test code (which is Bluebird under the hood) instead of native Promises. A replacement for the above function could be written as follows:

The only difference is that I’m instantiating a new Cypress.Promise in this block.

The one annoyance I found with using Cypress.Promise is that the resulting “Promise” cannot be awaited natively, since the browser does not view it as an actual Promise. Other than that, this approach has been working great. 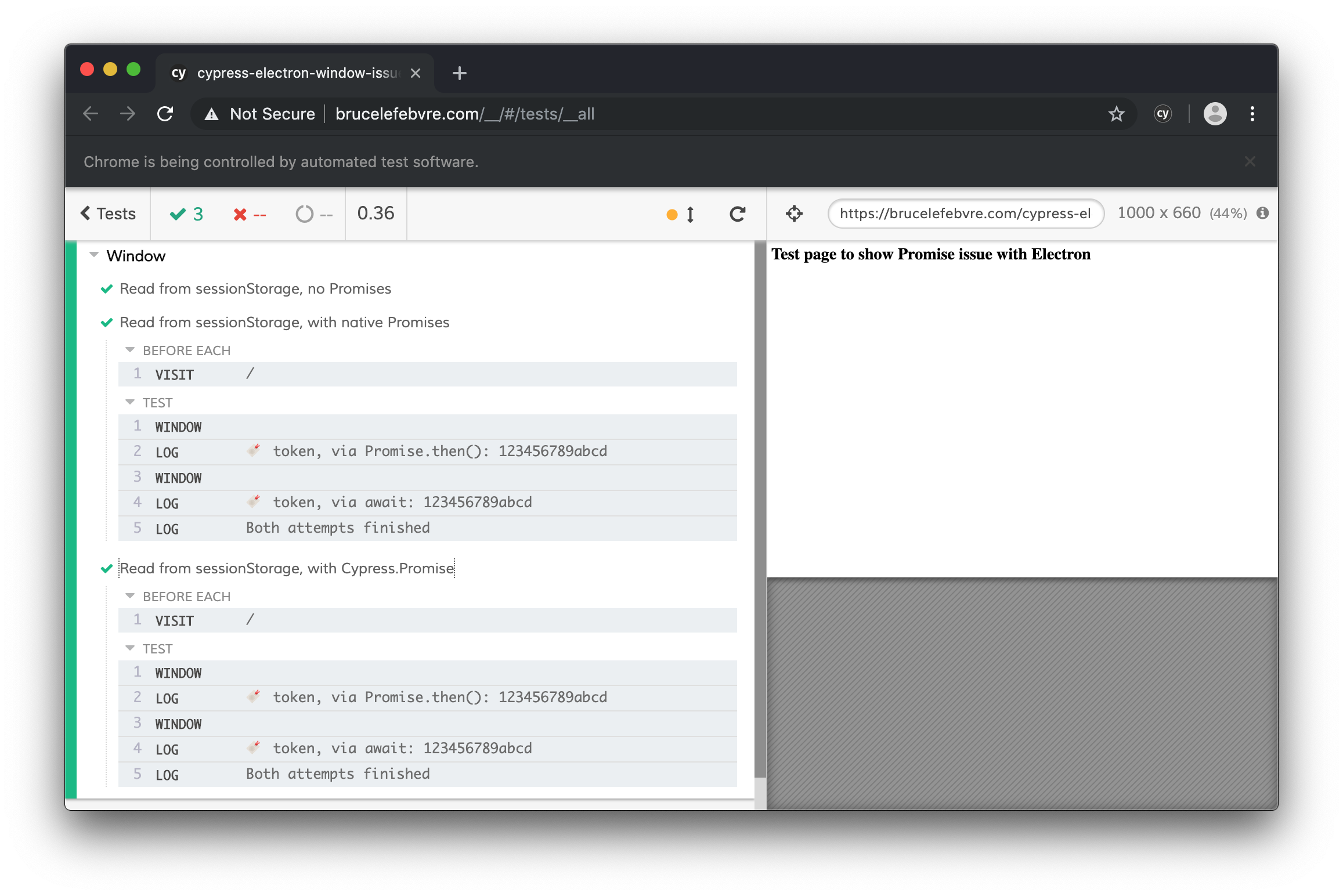 … with the result of that same test suite running on Electron: 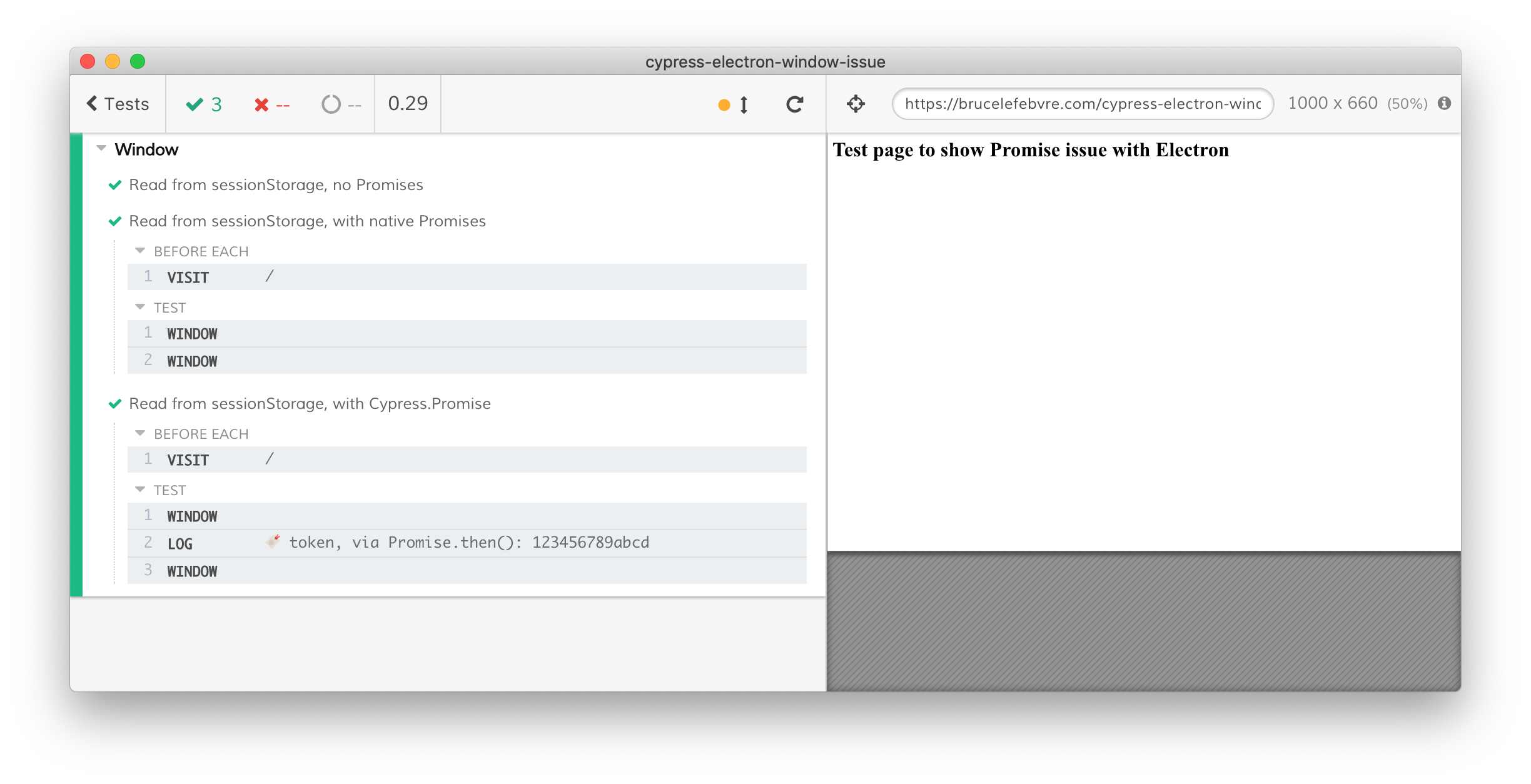 Oops! It appears that the Electron browser encounters a native Promise and stops dead, but the test case is still marked as ✅. You’ll also notice that await does not work with Cypress.Promise.

You can try out this code yourself here: github.com/blefebvre/cypress-electron-promise-issue

My hope is that by sharing my experience with this issue I can help someone avoid a headache. It is not lost on me that I could have avoided my own headache by reading the docs more thoroughly. My experience with Cypress has otherwise been great, and I still highly recommend that everyone check it out for their E2E testing needs.

Big thanks are due to the Cypress team for an awesome tool!